Adagio has a very interesting history to share. It is said that small business is the 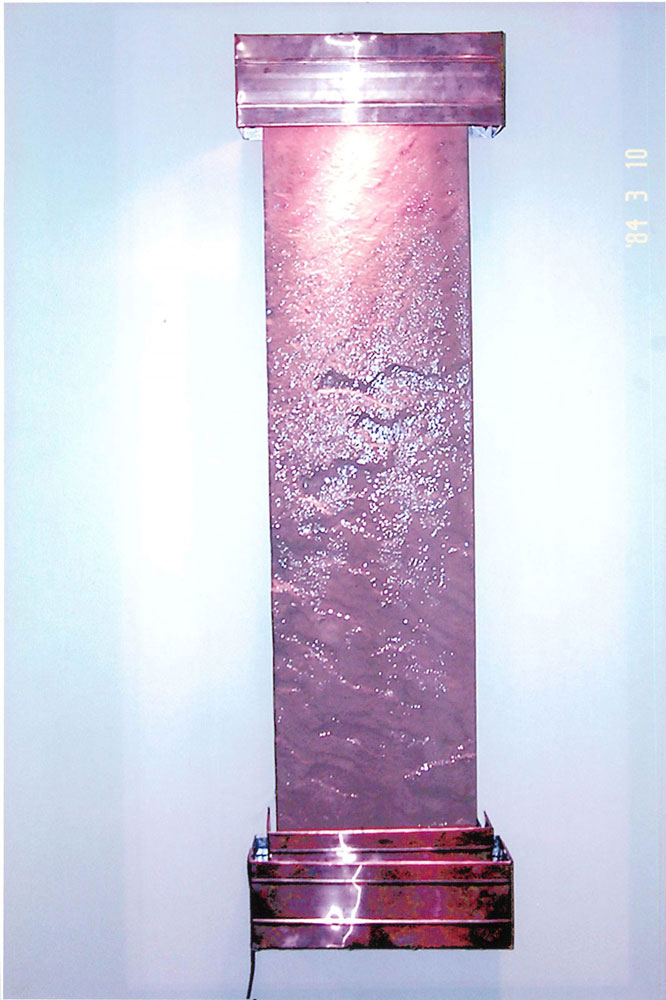 backbone of America. Well, here is our story in a nutshell. The first rudimentary water feature was created by Jeff Geddes in his high school metal shop class in Logan, Utah in 1984 (pictured to the right). It wasn’t until 2001 that Jeff teamed up with Alan Combs and Dan Jones to form a company and begin production and sales of their first water feature. Stones were imported from India and copper and stainless steel were fabricated by Alpha Systems, Inc. of Midvale, Utah. Alpha Systems was owned by Alan Combs.

The first furniture convention Adagio displayed at was in High Point, N.C. in October 2001. At that time this was the largest furniture convention in the U.S. Not having the resources to fly to NC and have their product and display shipped, Jeff, his brother and two friends actually drove from Salt Lake City to High Point in a truck with a trailer.

Jeff thought it would be good to display our only competitor’s product alongside Adagio’s so potential buyers could see the quality differences. Our product was clearly superior and when the owner of our competition saw his product on display in our showroom, he was outraged and had to be escorted out of the building by security.

One of the significant issues with a water feature is the control of the water. There needs to be plenty of water flowing over the surface (without clogging at the point of distribution) and not too much so that it doesn’t splash or leak from the holding tray. For the next 2-3 years Adagio invested heavily in perfecting water control as well as almost every part and function of the product. With the help of Bob May and Ron Pierce of Alpha Systems, Adagio invented a trough water distribution system that won’t clog.

Meanwhile, Alan Combs and Dan Jones purchased Jeff Geddes’ interest in the business and continued to market the product mostly in Utah and surrounding states.

In 2003 Adagio hired Justin Combs, a business graduate from BYU. He served as the impetus to get the business further off the ground. Justin is a now an owner in the business and also the General Manager. Through Justin’s leadership, manufacturing processes were improved and product lines expanded. We returned to the High Point furniture convention in 2004 and have never looked back since.

Adagio outsourced most of its manufacturing to Alpha Systems and a few other local fabricators. In 2010 Adagio purchased Alpha Systems and secured new machinery which enabled us to manufacture our product from start to finish. These changes have allowed Adagio greater control over the quality of workmanship for all aspects of the manufacturing process.

Except for the natural stones (slate, marble and travertine) imported from India, China and Peru, Adagio is truly a 100% American-made product. The goal of our company is to manufacture the highest quality and best valued water feature in the world. From the first creation in a metal shop class Adagio has grown to now offer over 20 different water feature products with numerous options in metals and surfaces. We also offer custom-made water features and logo engravings on all surfaces.

Adagio is continuing to grow outside the U.S. with dealers in Canada, Japan, Puerto Rico, and Central and South America. We have permanent showrooms at the High Point (located in Showplace, Suite 3329) and Las Vegas (World Market Building A-419) furniture markets.  All water features are not created equal!!